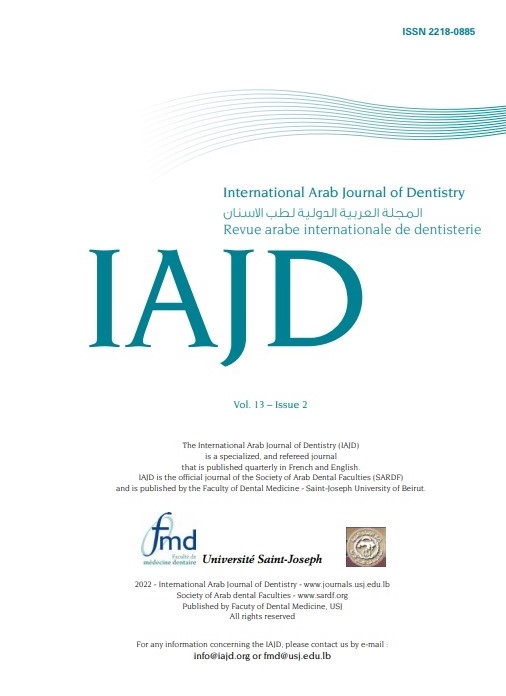 Purpose: The purpose of this study is to evaluate the vertical displacement of soft tissue during different impression procedures using various spacing of the custom tray, and to determine which impression technique would allow the minimal movement.

Materials and Methods: 21 partially edentulous patients were selected and enrolled in the study. Each patient was subjected to four different impression procedures: three alginate impressions with different spacing of the custom tray and one composed with different impression materials, then casts were constructed. Light-curing acrylic occlusal platform was constructed on the primary model and perforated in 10 different points. The plate was positioned on each of the 4 plaster models, then in the mouth; and the distance between the plate and the top of the crest was measured. Each measurement was repeated three times and the mean was recorded. Repeated measures analyses of variance followed by Bonferroni multiple comparisons were conducted to explore the difference among the groups. The alpha error was set at 0.05.

Results: The mean measurement of the distance between the plate and the top of the crest was significantly different among groups (-p-value <0.001). This distance, which correspond clinically to the vertical tissue displacement, was significantly more important for the models issued from alginate impression with custom tray spaced by one layer of wax (11.351mm), followed by the models issued from two layers of wax (11.155mm), followed by the models issued from three layers of wax (10.987mm) and the results obtained from the two-step impressions (10.824mm) were the closest to the mouth measurements which were significantly the lowest (10.635mm). Therefore, the difference in vertical displacement between the most and the least compressive impressions is approximately 0.527 mm, due to a maximum difference of 0.196 mm between each impression technique respectively. A tissue displacement of 0.716 mm resulted from the most compressive impression, while the least compressive one caused a vertical movement of 0.189 mm.

Conclusion: In conclusion, all the impression techniques caused a vertical displacement of the soft tissues. However, the custom tray with the irreversible hydrocolloid material resulted in a greater amount of movement than the two-step composed technique which showed the minimal displacement, and the compression effect depended on the spacing of the tray. When layers of wax increase, the compressive effect of the impression decreases and measurements become closer to the real measure in mouth. Although statistically significant, the minimal difference between the impression techniques may or may not be clinically relevant. Additional research is needed to assess clinical differences.