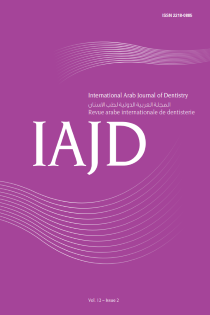 Statement of the problem: Emphasis on the aesthetic result will always remain a key priority, especially in the anterior areas. Thus, the color stability of a restoration partially defines the success of this restoration over time. The most commonly used layering material is porcelain, which is in intimate contact with food and beverages in the oral cavity.
Purpose: The purpose of this in-vitro study is to assess the color stability of two different layering porcelains after thermocycling in coffee, and then compare the color stability of these ceramics with each other.
Materials and methods: Two blocks of E.max CAD shade A2 were cut in blue phase to have 40 identical 1 mm thick blocks (N = 40). The E.max blocks were then crystallized and a stainless steel device was manufactured, in which each block was inserted, and the layering ceramic was added to flare the outer edge of the device (2 mm of feldspathic porcelain in height). 20 blocks then received the type of ceramic E.max Ceram shade A1 (n = 20), and the other 20 the ceramic GC LiSi shade A1 (n = 20), then were placed in the furnace for firing and glazing according to the manufacturers’ recommendations.
The blocks were numbered at the upper right corner with a red ring diamond bur of diameter 016 under water irrigation. Then, a 3D model was fabricated, in which each block was inserted in a cassette and reproducible points were recorded for each measurement. Using a spectrophotometer (Vita Easyshade
Advance), 3 measurements L * a * b * of the color were taken for each block at time 0 (M1). All samples were then subjected to thermocycling (coffee
at 55°C / distilled water at 5°C) for 1095 cycles simulating 1 year of clinical exposure to coffee. A second measurement (M2) is carried out, then the thermocycling continued until reaching 2190 cycles, at the end of which the third measurement (M3) was performed, and all the measurements transferred to Microsoft Excel software (2013). The L *, a * and b * data were then collected and the color change ΔE was calculated for each type of ceramic using the statistical software IBM SPSS Statistics (version 25.0).
Results: A statistically significant difference in color was observed within the two groups, as well as between the types of ceramics. After 2190 cycles, 65% of E.max Ceram specimens were above the acceptable threshold while 90% of GC LiSi specimens were above the same threshold.
Conclusion: The layering ceramics E.max Ceram and GC LiSi are both affected by coffee over time, but E.max Ceram seems much more stable than GC LiSi over 2 years of clinical simulation.